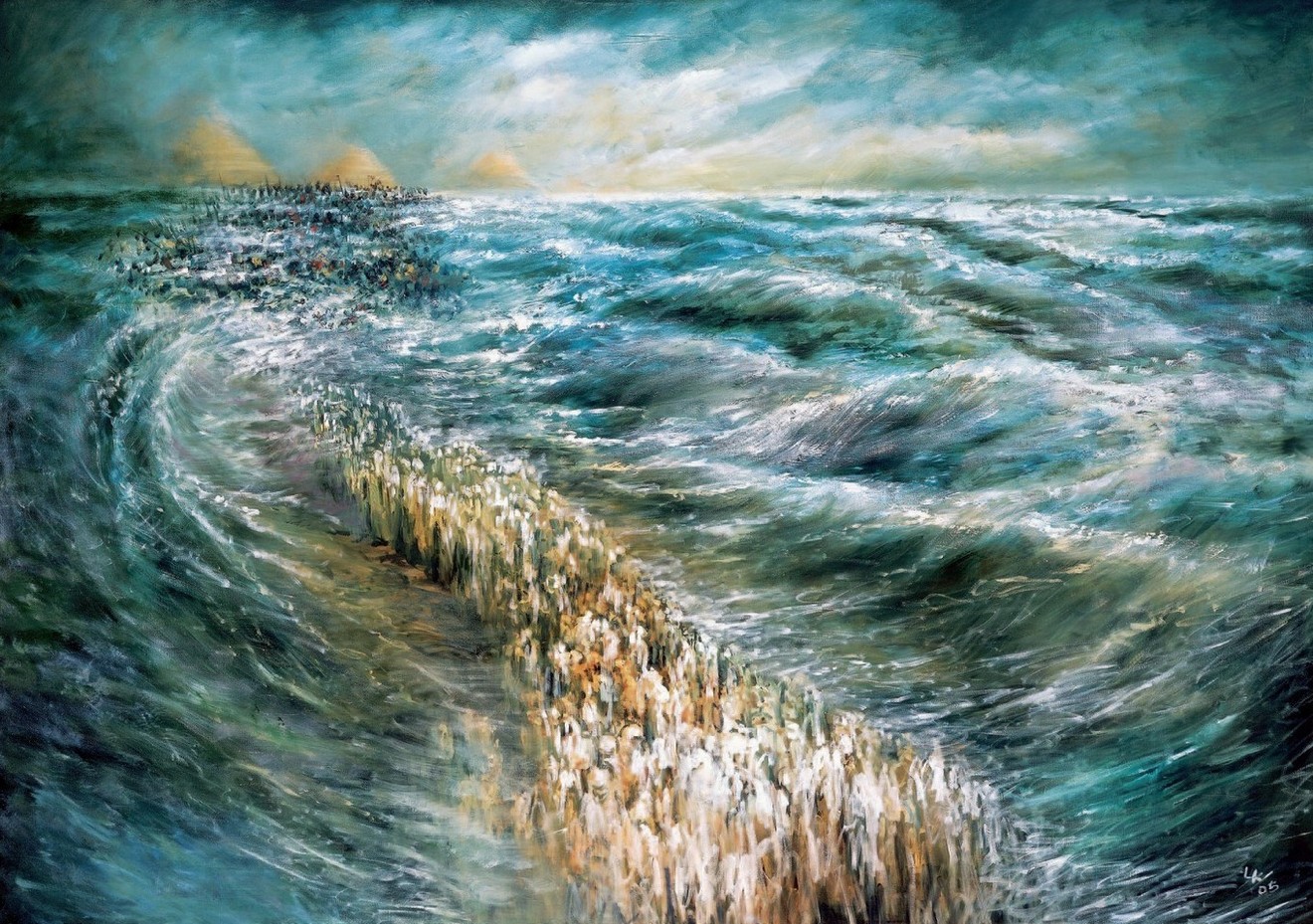 The poem “Zevach Passover” is recited in the Ashkenazi version of the Passover haggadah at the beginning of the “Nirtzah” section, the chants at the end of the seder. This poem lists historical events that occurred on the auspicious date of the 15th of the Hebrew month of Nisan.

The boldness of your strong actions showed you wonderfully on Passover; at the head of all the feasts you lifted Passover; You revealed to the Ezrachite [Abraham], midnight of Passover night. ‘And you will say, “This is the Passover sacrifice.”‘

You knocked on her doors in the heat of Passover [Genesis 18:1]; he supported those who shine [angels] with matzah cakes on Passover; and he ran to the cattle, in commemoration of the bull that had been trained for Passover. ‘And you will say, “This is the Passover sacrifice.”‘

The Sodomites outraged him and he set them on fire on Passover; Lot was saved from them and he cooked matzos at the end of Passover; He swept the land of Mof and Nof [cities in Egypt] at Passover. ‘And you will say, “This is the Passover sacrifice.”‘

According to the author of the poem, it seems that the story of the visit of angels to the convalescing house of Abraham followed by the destruction of Sodom happened on the first night of Passover – 15 Nisan.

While the name of Moses hardly appears in the Haggadah (just once, in a quoted verse), that of Abraham deserves several mentions. The “Maggid” section begins with a description of Abraham’s family history: how God chose him “across the river” and brought him to Canaan and blessed him.

What makes Abraham particularly relevant to the Exodus story is the prophecy he received that foretold his descendants’ slavery in a foreign land for 400 years and their ultimate redemption accompanied by great wealth.

The message and relationship between Abraham, Passover and Sodom become clear when seen through the prism of the verses of the poem “Zevach Passover”.

We can deduce from the poem that Abraham performed his mitzvah brit milah (circumcision) three days before Passover (anything to avoid Passover cleansing!). The midrash explains that God had made the weather abnormally hot to prevent travelers from disturbing the recovering Abraham. His only potential guests were angels in human guise, who were sent to heal him, inform him of the impending birth of a son, and destroy Sodom. Abraham, happy to be hospitable, enthusiastically invites them into his tent, asking them first to wash the dust off their feet, to remove the possibility of their participation in an ancient idolatrous ceremony honouring, literally, the dust off their feet. . Abraham’s hospitality can therefore be seen as directly related to his lifelong monotheistic evangelistic program, teaching the world to recognize the one true God.

On the first night of Passover, these angelic guests inform Abraham of the impending miraculous birth of his child. He could then presume that the future of a nation whose destiny it was to bring mankind to God’s acceptance and ultimate redemption was assured.

The connection between circumcision and Passover is not arbitrary. These are the only two positive commandments for which one receives the punishment of Karet (a cut), if they were left unsatisfied. We also find Elijah the Prophet “present” both at the ceremony of the brit milah (according to tradition, Elijah attends everyone) and at the Passover seder (when the door is opened late in the seder to allow him to enter), with the first celebrating his personal covenant with God, and the second the national covenant.

Continuing the story of Abraham, two of the angels go to Sodom, one to save the patriarch’s nephew Lot and his family, and the other to destroy the city. Lot maintained some of the lessons he learned from his uncle and invited foreign travelers to his home. He even seems to have served them matzah! This meritorious act turned out to be crucial for Lot to be worth saving. When neighbors discovered that visitors had arrived, they surrounded his house and demanded that Lot return them for prosecution – home hospitality was against the law there. Lot left the safety of his home in a vain attempt to save his guests by offering his daughter in their place. While his intentions may have been laudable, his methodology is certainly highly questionable. To save Lot, the midrash explains, the angels struck the assailants blind. And Lot finally overcame his reluctance to leave his adopted society, was pressured by angels, and told not to look back. Interestingly, Lot referred to himself as servant and slave, alluding to the fleeing Israelites in Egypt.

Indeed, many of these narrative elements reappear in the Egyptian redemption. The unworthy Israelites were saved after performing meritorious deeds. In Exodus, security was inside the house and the Angel of Death was hiding outside. The midrash again finds blindness as a punishment – this time, for the attacking Egyptians. In Sodom and Egypt the devastation and destruction continued throughout the night. And like Lot, the Israelites left in haste, ordered never to return.

Lot may have been physically saved, but emotionally he has become a broken man who finds himself in a cave with his two daughters and ends up being seduced by them. Like their father, Lot’s daughters may have had good intentions – they believed that the three of them were the last people on earth and set out to perpetuate humanity. They succeeded, but their means were certainly questionable.

What enabled Abraham to succeed where Lot failed? When Lot left Abraham, the void of his influence was filled by Sodom. Abraham did not allow foreign ideologies to cross his threshold and he expelled those who risked doing so. Yet Abraham’s own nephew became part of Sodom and its decadent and evil culture.

The Exodus from Egypt refers not only to the physical departure from Egypt, but also to the taking of the gods from this land and their slaughter. But in getting rid of the Egyptian pantheon, the Israelites must fill the void – humanity, it seems, hates a vacuum. Fortunately, they fill it with God.

As we celebrate Passover this year, we can reflect on the call to hospitality with which we open the seder—reflecting the hospitality of Abraham, and indeed of Lot. We can think of the chametz (leaven) we have just removed from our homes as representing the negative and corrupting influences that can, on occasion, enter our homes – and do all we can to get rid of them as well. The song at the end of the seder is timely in this regard, reminding us to look to Abraham as our model. Our freedom that Passover celebrates goes beyond leaving the slavery of Egypt in our wake; rather we turn to the patriarch and put on the yoke of freedom to turn to God, as he did.

Dr Chana Tannenbaum teaches at Bar Ilan, Michlelet Herzog and Matan University. She worked as a Jewish educator, in teaching and administration, for more than 30 years. She received her doctorate from Yeshiva University, where she also received the Baumel Prize, awarded to the most outstanding member of Yeshiva University’s faculty. Dr. Tannenbaum made aliyah with his family in 1997, moving to Nof Ayalon.

Contemplating the History of Good Friday and Passover | Blogs