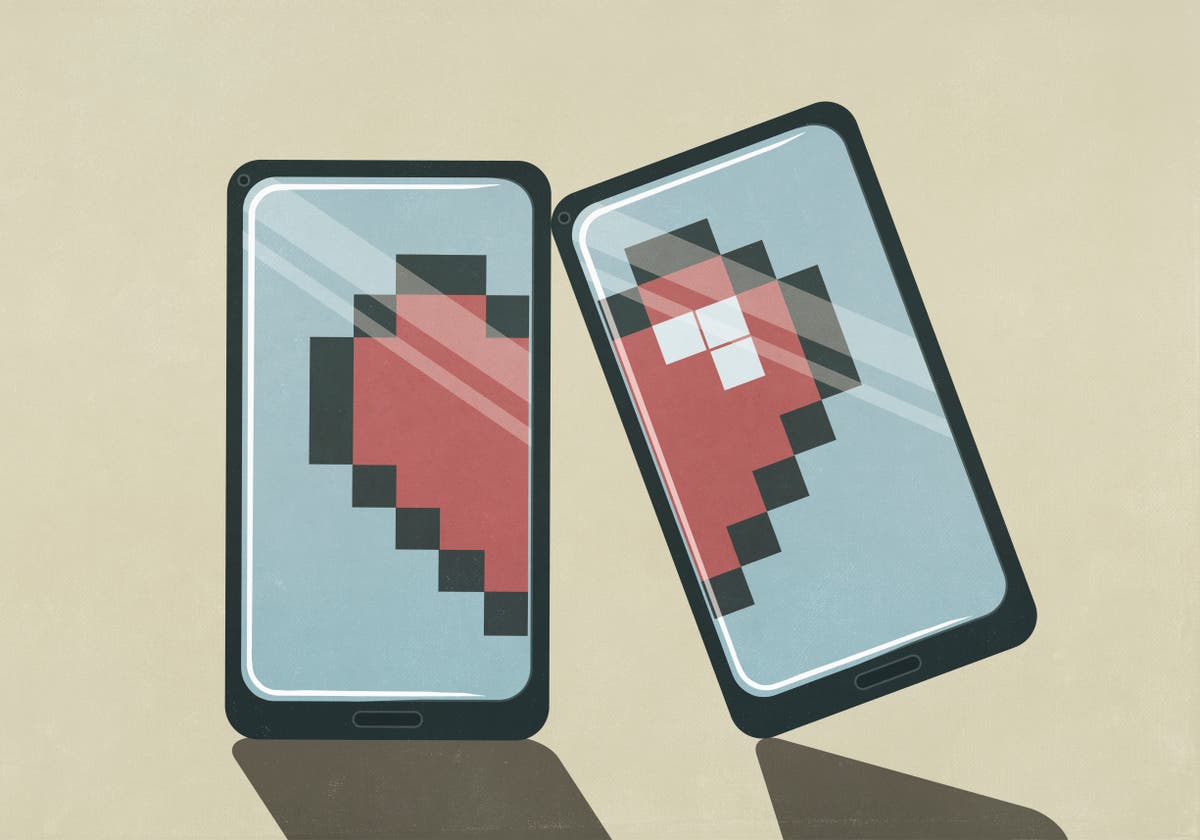 It’s been ten years since Tinder launched, but in dating years, it’s almost a lifetime. Back then, finding a partner online was still something you would shyly admit, and courtship moved at a quaint and charming pace. You signed up on a website, wrote a thoughtful profile, and exchanged long messages with those you were attracted to, like some kind of Jane Austen character. It wasn’t just about copying and pasting ‘Have a nice weekend? lol’ to your top five matches, accompanied by a tongue-out emoji.

Tinder, an app that encouraged quieter interaction, quickly caught on: within two years, it was generating more than six million matches a day. Happn, Bumble, Feeld, Hinge, Thursday, Grindr, Raya, Lumen, Inner Circle, and Badoo are among the countless other apps that have popped up along the way, using similar functionality. Dating services in the UK currently have a market of £311million, and using one is now the norm, not the exception.

Yet a survey of 2,000 people by Scribbler last year found that both men and women would much rather meet a partner on a night out. App users complain about matches that lead nowhere; rude or boring conversations; and bad behavior on dates. Worse, the apps make people feel like they’re disposable – one swipe and they’re gone – and cultivate a sense that no matter how many hours they spend searching and messaging, a real relationship will be impossible. to find.

What Tinder can take dubious credit for is introducing a sense of playfulness to the quest to meet a partner. We swipe and swipe and swipe, sometimes so fast that we’ve tossed someone into the no’s pile before we noticed they were attractive. When we “win” with a game, we often keep slipping.

“Gamification is when developers freely apply game elements to other aspects of life, to capture attention, drive engagement, and generate revenue,” says Natasha Dow Schüll, author of Addiction by Design. She’s a cultural anthropologist who studies addictive technologies, and her primary focus is gaming, but many of her findings apply to dating apps as well. “At the end of the day, the app is more invested in its own earnings than getting you married or having sex, so they’re trying to incentivize your engagement.”

This addictive form of dating traps us in a loop of finding partners, sometimes at the cost of meeting them. Technology does this in four ways, starting with loneliness: “Even if you’re playing poker online and there are technically other people at your virtual table, or if you’re on a dating app and ‘there are other people to talk to – the interaction with the app is really just you and the screen,” says Schüll. “The motivation is for human connection and maybe love or sex – but you don’t want to go out to the party anymore. You want to stay in your room, parade.

The second irresistible element is the feedback speed. While Austen’s characters waited days for a letter to arrive on horseback, we often benefit from instant responses on apps. “Psychologists would call this a stimulus response – you take an action and the response to it is almost immediate,” says Schüll. “That, in the language of addiction, is very empowering.”

According to Schüll, the work of 20th century psychologist BF Skinner explains another piece of the puzzle. He developed the “Skinner box”, in which rats or pigeons could access food pellets by pressing levers. What he found was that animals would be more persistent with levers when rewards were unpredictable. “If you knew you could peck 10 times and get a pellet, you would do it when you were hungry and then stop,” says Schüll. “But if you never know what’s going to happen and you never know when, you’ll be just sitting there pecking.” On dating apps, your perfect match may show up on your next swipe, or your 10th swipe, or your 47th; which makes it harder to stop looking.

The final factor, she says, is that the pool we fish in seems bottomless. “The app isn’t going to say, ‘We don’t have anything for you! Go to bed,” says Schüll. “So there is a possibility of death and mourning when you turn it off or disconnect.”

In her book The Future of Seduction, journalist Mia Levitin highlights how restless this makes us. Endogenous opioids, produced in the brain, create satisfaction as part of natural rewards — “so if you eat a good meal, eventually you’ll feel full,” she says. “If you have an orgasm, the body doesn’t necessarily want to have another orgasm – it feels satisfied. It’s an opioid reaction, whereas the dopamine reaction we get from a Tinder match is unsatisfactory. The app designers tapped into this system: infinite scrolling and swiping doesn’t lead to satiety. »

Other issues arise when the experience of using a dating app derails dating itself. “In a 2018 study, 45% of Gen Z said the main reason they use apps is just to have something to do, so it’s a game rather than looking for a date” , says Levitin. “For people who are out there looking for a date, it can be very frustrating because you’re up against a large population that’s really just there to boost the ego.”

Even if you walk into a meeting, online norms seem to have influenced our offline behavior as well. The lack of face-to-face contact on apps makes people feel justified in doing things that would have been harshly frowned upon a century ago – like ghosting (disappearing without a trace) or breadcrumbs (stringing someone with sporadic romantic attention).

“Ten years into sweep dating, we’ve entered a pattern of lack of accountability,” Levitin says. “These behaviors have led to what psychotherapist Esther Perel calls ‘stable ambiguity’: we want to have someone to be intimate with whenever we want, but we also want freedom in case something better comes along. , and I think that has really fundamentally changed relationships.

Perhaps most dangerously, interactions with apps can make us think we know someone better than we do. Levitin cites the research of Joseph Walther, who studies the effects of computer-mediated communication; he found that when we have a good first impression of someone online, we fill in the blanks with positives. “I think that’s what led, between 2011 and 2016, to a six-fold increase in aggravated sexual assaults by strangers who had met online dating,” Levitin says.

The Match Group, which owns Tinder and several other major dating services, has suffered a stock price drop of more than 50% this year; there are signs that young daters aren’t happy with what’s on offer. “90% of Gen Zers report being frustrated with apps, and 40% report being happily single,” says Levitin. “Part of me thinks it’s a positive development, but if people generally become more self-centered, it makes relationships more difficult. The individualism fostered by anything allows us to create a small universe to our taste, including applications, definitely makes mating more difficult.

Either way, Tinder might eventually die, but its legacy already runs deep. “Application dating is with us, it’s evolving, and every new iteration of data science is caught up in that sphere,” says Schüll. Prepare yourselves.

Jobs, love life, Instagram and everything you need to know