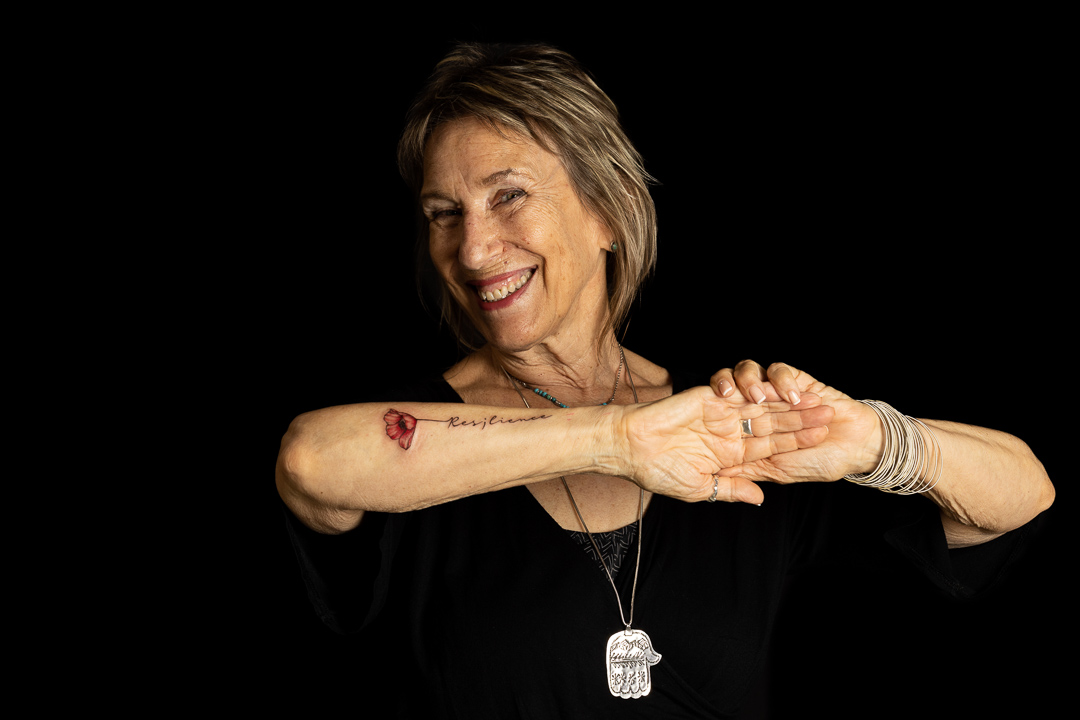 I never even dreamed of putting a needle on my skin. Yet, out of the blue, I got a shoutout on Facebook asking if I could help bring HealingInk in our Western Negev area. A stranger named Craig asked if anyone could help find a place to hold an event for Artists4Israel, where tattoo artists from all over southern Israel could come together for a healing tattoo day.

These artists believe in the healing power of tattoos for survivors of violence, who bear both physical and emotional scars.

Yes, it’s true… my own scars are emotional. Living with the devastation of surviving suicide, while coping with daily life that sometimes happens in the 0-10 second gap between an incoming rocket alert and its inevitable explosion, has left me invisibly scarred. With each successive round of violence, each incoming rocket scare, another scratch is etched into my heart and soul. The stress of these episodes fades, but the scars remain, hidden from the naked eye. At that time, I decided to bring these people to this area, to help heal those suffering from emotional trauma, PTSD, or those who bear the physical scars of the sacrifices made in our defense. I decided to take the plunge, participate and apply for the chance to be healed. I decided to allow an artist to engrave something on my own body, something that might heal my broken heart. I wouldn’t have considered doing it without such a program, and by doing it in this setting, I felt the power of being part of a healing community.

I learned to hide them well, my emotional scars. I take care of them by doing a lot of things when I feel the need: blogging, writing, speaking. However, this project made me realize that I also needed to make my scars visible, embellishing them with bands of color embedded in my skin. I know, I am aware of the fact that I have never been able to build a new relationship, even 14 years after the gunshot that killed my beloved husband, by his own hand, shattering my heart to pieces. This tells me that there is still healing to be done.

I did not choose to lose my husband in such a sudden and traumatic way. I do not choose for rockets to explode around my house, threatening my life and that of my loved ones. But it was something I could choose. Getting a tattoo means taking control. Take control, in a small way, of these events that marked me invisibly. I choose to take control wearing my resilience as a badge of honor, proof that I have survived what was thrown at me and navigated the darkness, to the other side. While I hope not to have to do it again, this badge, with this word and this flower that comes from it, reminds me that if necessary, I can do it again.

In order to participate in this program, each of us was interviewed by a social worker associated with the group, checking suitability, then selecting the best match with one of the performers. When the matchmakers worked their magic, my wonderfully talented artist, Yasmin, contacted me and together we developed the concept for my special and unique body art.

On “Tattoo Day”, we all gathered in “The Guild” — a regional center for the arts. I found it haunting but uplifting to sit there waiting my turn, in what had been one of our regional schools, which had been emptied in 2009 due to an increase in rocket attacks and the lack fortification in old buildings. The school remained abandoned and vandalized for 12 years until a group of local artists took it upon themselves to renovate it and turn it into another miracle of the region: an arts center of all kinds. Classrooms have been transformed into artists’ studios and the central hall is now a place for exhibitions and social events.

As we sat together, waiting in the now transformed building, decorated with colorful animals and whimsical walls, the tension was palpable. We started sharing each other’s stories, taking the opportunity to bond. Telling my own story, hearing other people’s stories, like the story of a man, who had a childlike drawing tattooed on his body – a stick drawing of a sun that had been done by his 5 year old nephew, who had was killed by a Hamas rocket in his living room. There was a woman and her son, both suffering from PTSD just because of where they live, having fearless lions inked on their arms for protection and affirmation. 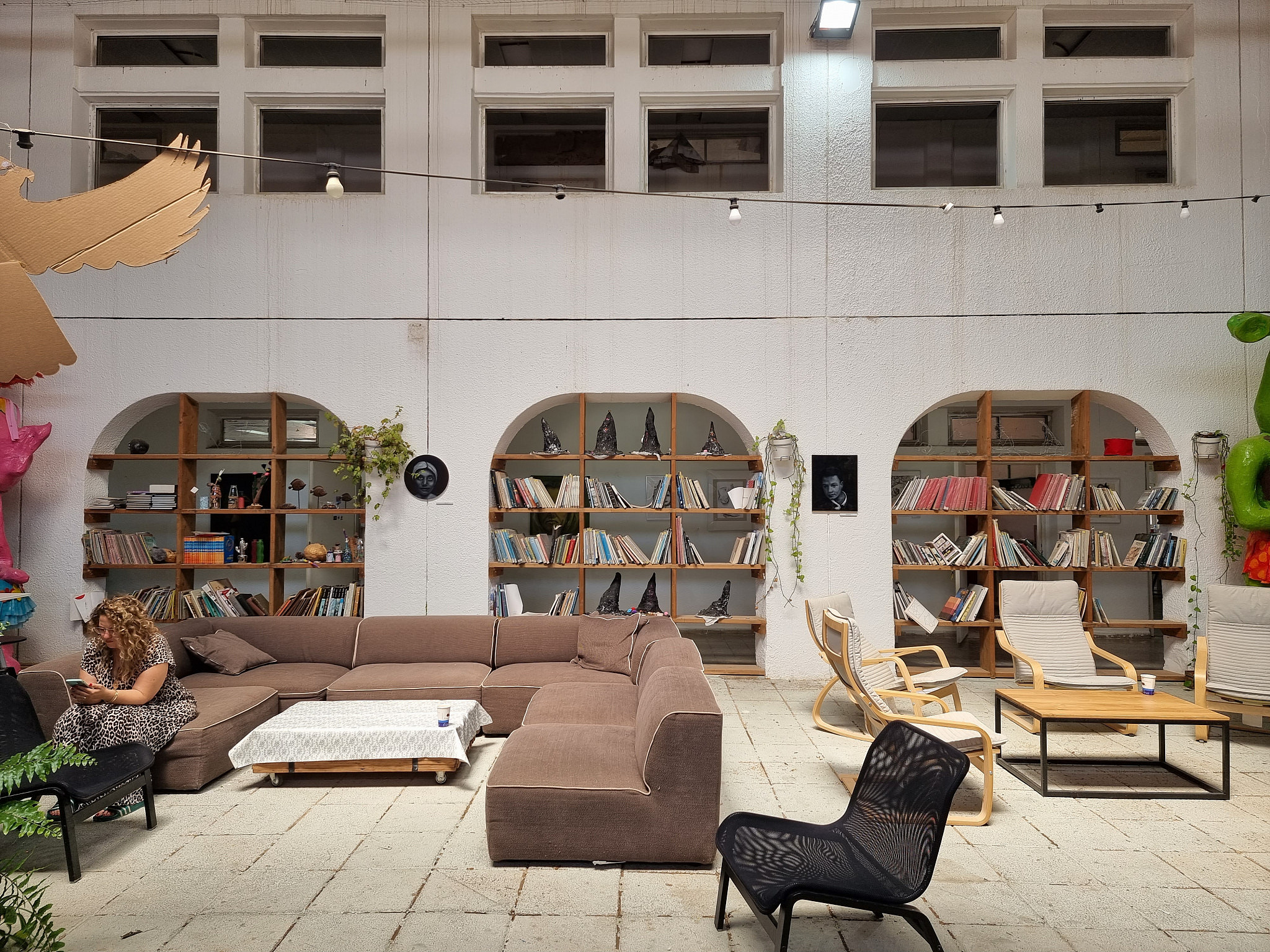 Then talk to my artist, a sweet young woman – born and raised in my area, who had been a student at my school and even remembered me as a teacher. Together, we worked out the concept on his mac hi-tech tablet (the tattoo isn’t what it used to be). We measured and negotiated, she offered me her attention for as long as needed. After all, this piece of art will be with me for the rest of my life. 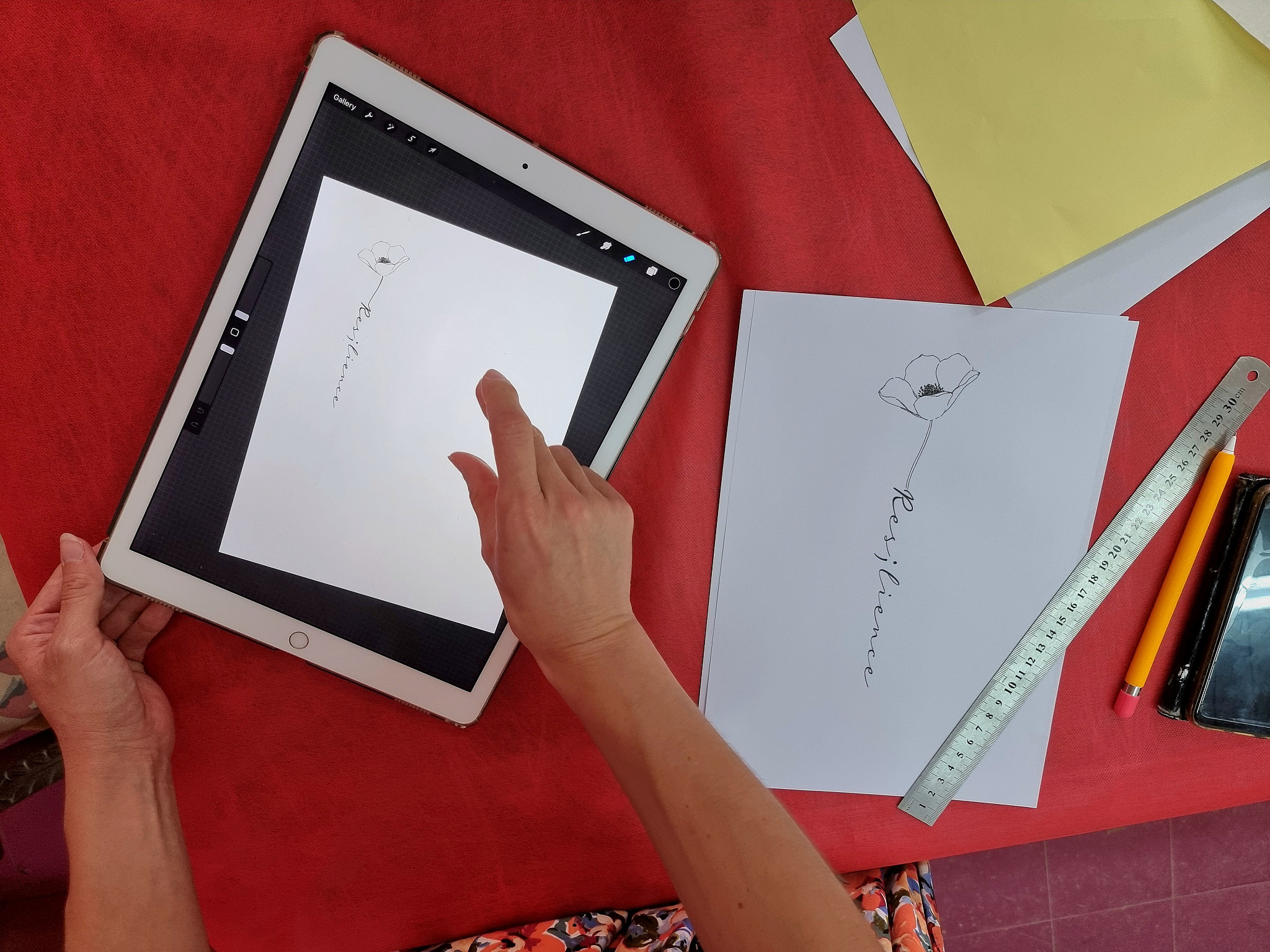 She then worked on my aging skin (harder than a 20 year old’s skin) with patience and care, stopping at regular intervals to check in, checking that everything was going the way I wanted, then moving on. Most of the time, it felt like a lot of eyebrow waxing. In the end, the coloring of the flower caused searing pain, but the pain was temporary. (Time flies when you’re tortured.) This tattoo is now part of who I am. 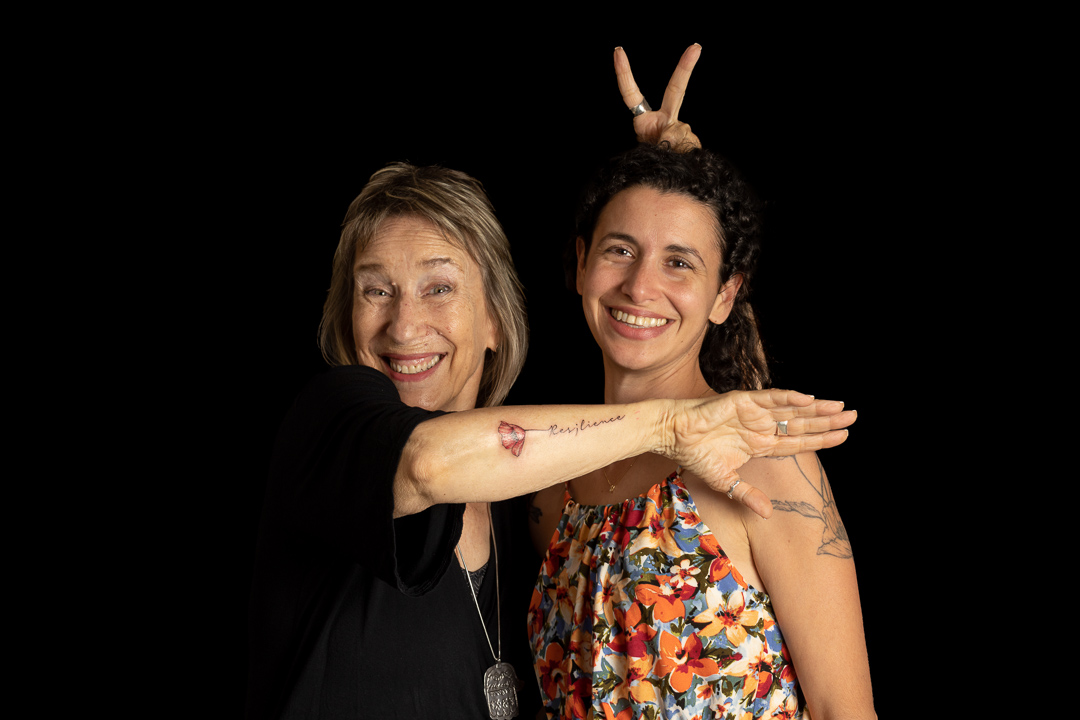 As a kid growing up in New York, the only grandmothers I knew with tattoos were the ones with numbers on their arms. This grandmother has a word, a symbol and a flower. Resilience: because it is something, I have discovered that I have it. A semicolon stand together against suicide and depression. An anemone that springs from the word: delicate and beautiful like the flower that represents my region.

I cannot end this without thanking the many people who worked tirelessly to make this day a healing success for so many. 17 tattoo artists worked their magic on 20 recipients of their art. To Lorraine, Mintz, Ziv, Ben, Yair and the many others whose names I don’t know, but who worked selflessly behind the scenes to make this happen. To my wonderful Yasmin, who gave me this gift forever. And finally, to Craig, who is no longer a stranger, but a friend. 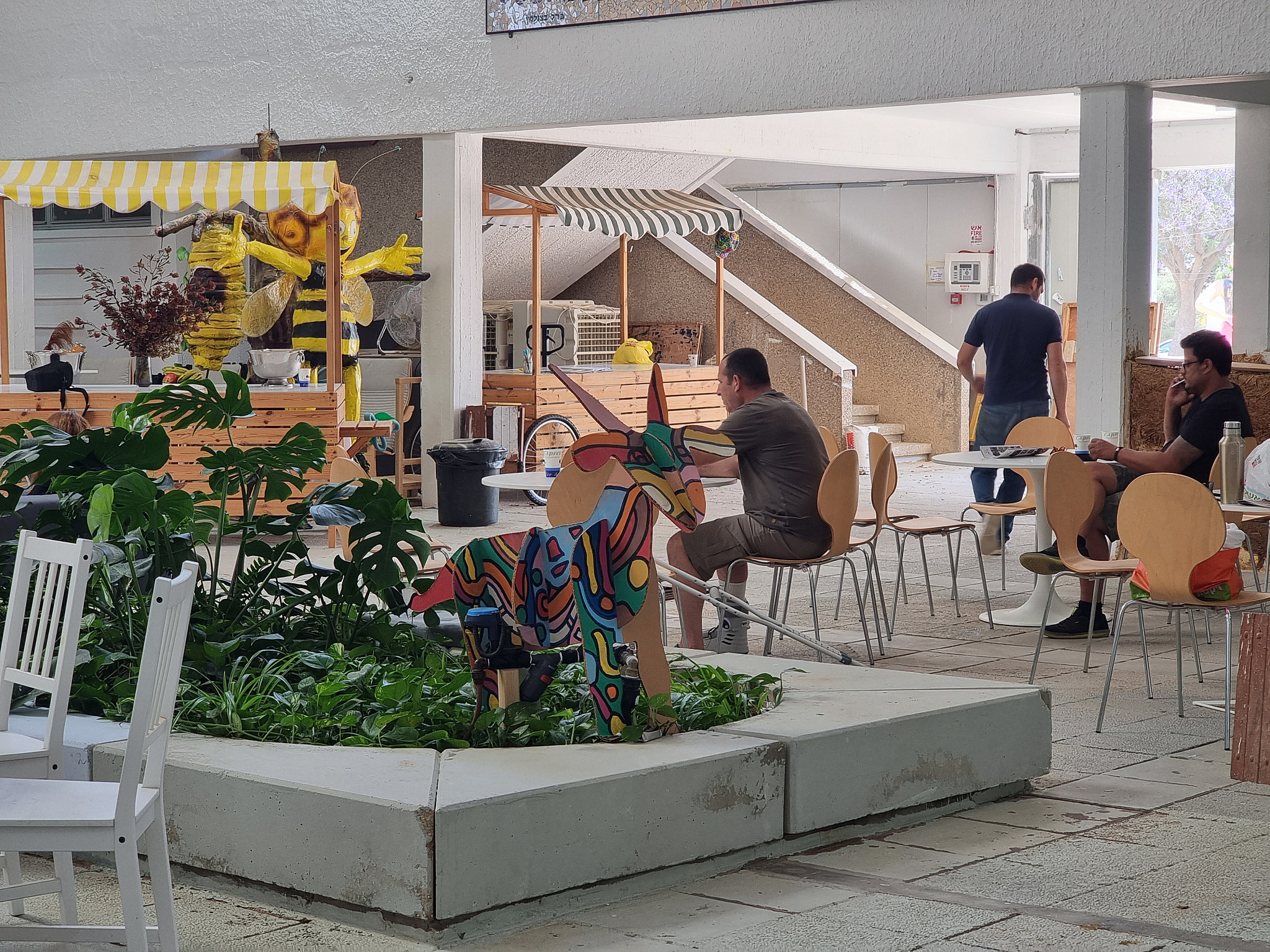 Born in the United States, Adele has lived in a kibbutz on the border with the Gaza Strip since 1975. She is a mother and grandmother living and raising her family on the usually heavenly, sometimes hellish border. She hosts a FB group called “Life on the Border”. https://goo.gl/xcwZT1 Adele recently retired after 38 years as a teacher of English as a foreign language, as well as a teacher trainer and adviser for the Israeli MoE for EFL and a business coach technological integration. She blogs here both on Life at the border, as well as on digital pedagogy, in “Digital yours, @dele”. She’s a YouTuber, mostly on the subject of digital stuff. (https://goo.gl/iBVMEG) His personal channel covers other topics close to his heart (medical clowning, life on the border, etc.) (https://goo.gl/uLP6D3) Plus, she’s a trained Medical Clown, and while on COVID break, until she’s cleared to return to hospitals, she clowns around as often as she can in the pediatric ward at the hospital. Ashkelon Hospital. Due to her activity as an advocate for her region, she was included among the Ha’aretz “Ten Jewish Faces who made Waves in 2018” https://goo.gl/UrjCNB. In November 2018, she was invited to Geneva by an independent UN commission of inquiry to testify about the border situation and, in December 2019, she addressed the UN Security Council at the request of the United States Ambassador to the UN.