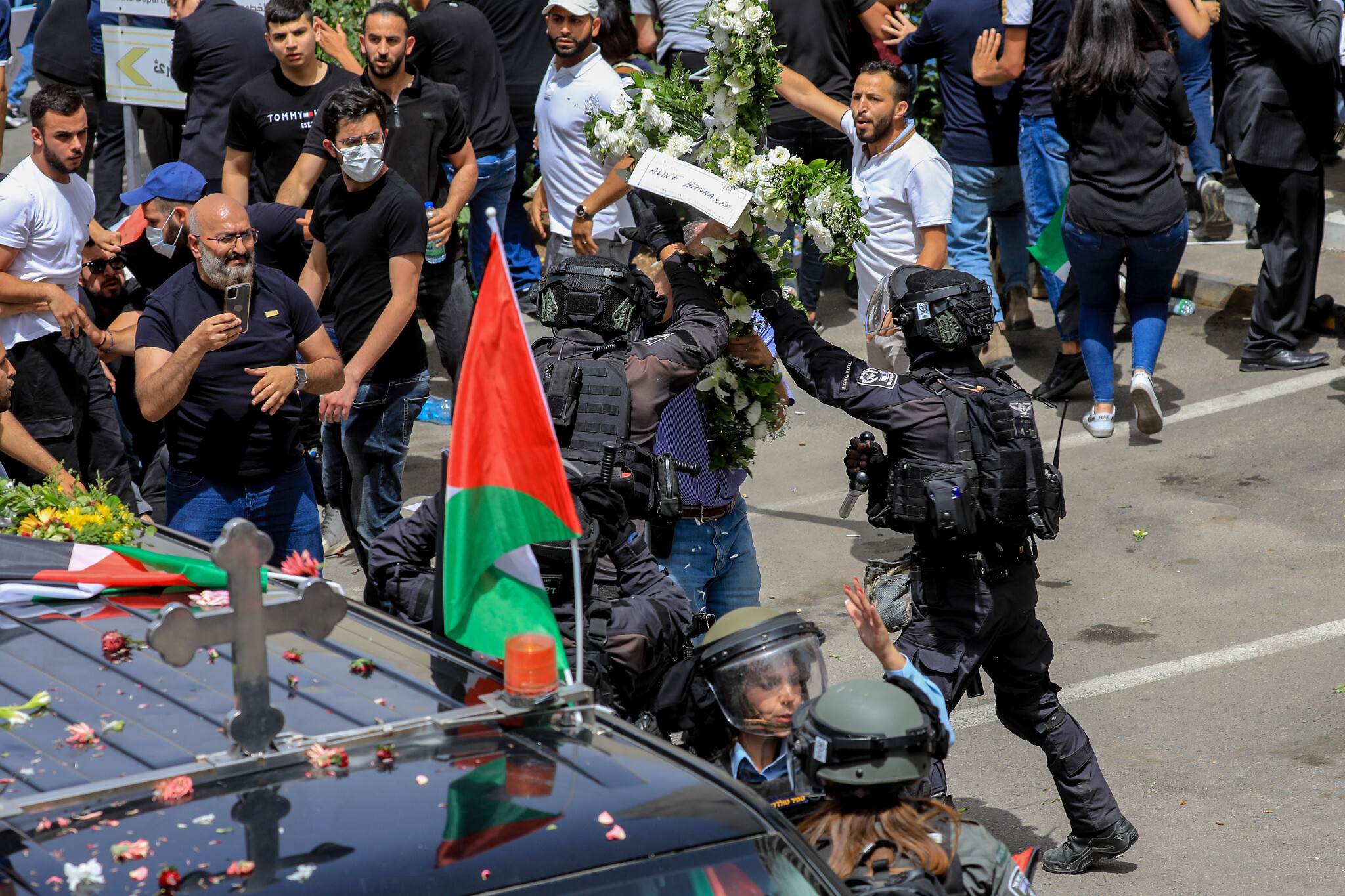 Among the disturbing scenes that emerged from the funeral of Al Jazeera journalist Shireen Abu Akleh were images of Israeli police seizing Palestinian flags. Beyond the obvious affront to liberal democratic notions of freedom of speech and expression (including the rights protected under Israeli law and court rulings), it also speaks to a failed but stubbornly persistent Israeli strategy of attempting to completely dilute Palestinian nationalism.

According to Shireen Abu Akleh’s brother, Tony, the Israeli police contacted the family before the funeral and requested that no Palestinian flag be present in the procession. When police eventually intercepted the funeral in East Jerusalem, they confiscated and removed flags at Abu Akleh’s funeral. Alongside Abu Akleh’s funeral incident, a video emerged of a bizarre incident, in which a police officer asks a woman to remove her hijab because it shares the colors of the Palestinian flag.

Tony Abu Akleh informed the police that the event would be a “national funeral”, due to the circumstances surrounding his death (including the possibility, that the two Benny Gantz, Minister of Defense and the IDF conceded separatelythat Israeli troops were responsible – that independent reports of PA and Bellingcat practically confirmed that it was). Given Abu Akleh’s high-profile journalistic career as a Palestinian covering the conflict, it is likely that his funeral would have been a national event even if there had been no chance that Israeli forces were involved in his died, or if she had died in a completely independent setting of the profession.

A “state funeral” was clearly not to the liking of some in Israel, and attacking the Palestinian flag reflected a dangerous form of wishful thinking in this regard. Perhaps the police hoped that Abu Akleh’s tragic life and death could be depoliticized and stripped of nationalist symbolism. Dealing with the political situation means tackling larger issues than any death or individual issue.

National symbols have also become a target in other contexts: Palestinian flags were seized during protests in Sheikh Jarrah last year and are found in the territories occupied for decades. Last week, Times of Israel reporter Jacob Magid shared a video Israeli soldiers helping settlers remove a Palestinian flag in Hawara – notably located in Area B of the West Bank, which is nominally under civilian control of the Palestinian Authority. While Israeli courts have held that the Palestinian flag can be waved freely, this has not always been the case. In the decades preceding the Oslo Accords, displaying the Palestinian flag could lead to heavy penaltiesincluding prison terms, under Israeli military administration in the West Bank and Gaza Strip.

The self-deception about neutralizing Palestinian nationalism extends beyond Abu Akleh’s funeral and the Palestinian flag. It manifests in the tendency among some Israelis to continue to refer to Palestinians simply as “Arabs”, consciously or unconsciously treating them as indistinct members of an Arab nation spanning North Africa and the Middle East rather than a distinct identity and group with a specific relationship to Israel. This arises from the idea that Israel’s existential identity and institutional problems can be resolved in Abu Dhabi and Riyadh rather than Jerusalem. It is present in reflections in Israel and Washington on “economic peace”, which imagine the Israeli-Palestinian conflict as being about bank balances and financial results rather than history, borders, ethnicity and to religion. And it was seen in a particularly ugly way this week, when Likud member of the Knesset and former foreign minister Israel Katz urged students waving Palestinian flags at Israeli universities to “remember our War of Independence and your Nakbah [catastrophe].”

This is not the view of all Israelis, of course. On the question of flags in particular, the Minister of Public Security, Omer Bar-Lev, happened last year, demanding that the police stop seizing Palestinian flags. The appeal of a docile, apolitical rival is obvious, but it’s not grounded in reality. But the fact that this perception persists as a practice among a wide range of figures ranging from politicians to police officers and rank and file soldiers is troubling. It is a curious and sad thing for Israelis, whose patriotic narrative emphasizes restoration after 2,000 years of exile, to think that pulling down a flag can seriously stifle a national movement. Seizing a flag will not curb Palestinian nationalism, but it will increase resentment across the Green Line.

Evan Gottesman is an adviser to the Israel Policy Forum. His work has appeared in Foreign Policy, World Politics Review, The National Interest, Haaretz, The Diplomat, The Forward and +972 Magazine. Evan has briefed numerous members of Congress and senior legislative officials on US-Israel relations and the Israeli-Palestinian conflict, and has been quoted and quoted in The Washington Post, USA Today, and VICE News. He is currently a master’s candidate at the Johns Hopkins University School of Advanced International Studies.