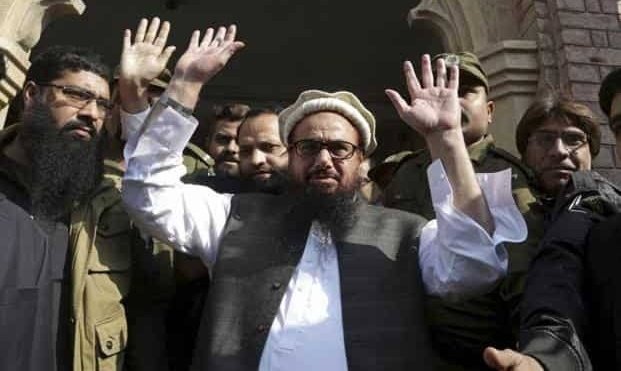 The fall of Imran Khan’s government after weeks of drama in Pakistan is another nail in the coffin of democracy in a country beleaguered by military coups. The latest, which was quietly announced, returned power to the military in the form of an interim government and obscured key events in Pakistan that also have a direct effect on global security.

The sentencing of terrorist mastermind, Hafiz Saeed, to over 31 years by an anti-terrorism court in Pakistan for financing terrorism may seem like a surprising turnaround, but in reality, it is just a show put on for the Group of Action Financier (FATF), the global organization Observatory on Money Laundering and Terrorist Financing.

Pakistan, which has been on the FATF gray list for a few years, is desperate to prove that it was serious about stopping the financing of terrorism operating in the country. Such acts are not new to Pakistan – Saeed and his cronies have been charged and convicted numerous times, including after the Mumbai bombing in November 2008 which killed more than 170 people. But each time, the charge is challenged in a higher court and judges have been quick to dismiss the cases.

Hafiz Saeed is not new to terrorism – he’s been around long before the more infamous Osama bin Laden arrived on the scene. In fact, Saeed is the oldest living terrorist mastermind in the world. He survived all manner of scrutiny and punishment and lived to tell the story of Pakistan’s deep relationship with jihad. Saeed lives in plain sight, leads a large family with multiple wives, runs a corporate empire, and has long relationships with the Pakistani military and several political leaders. He is also the head of Lashkar-e-Taiba (LeT), a global terrorist group involved in several global terrorist attacks including the one in Mumbai.

Saeed and his group, including Jamat-ud Dawa and various other charitable fronts, have been raising funds for years through various means. Most important were the voluntary contributions of businessmen, political leaders and others. Pakistan has yet to identify these individual entities that continue to fuel jihadist fire. Millions have been donated by international charities like Al-Anfaal Trust, Dawatul Irshad Trust and Muaz Bin Jabal Trust among others. Huge amounts came from Bangladesh, the Maldives, Saudi Arabia and various other Muslim countries.

Another major source of funds for the terrorist group has been the provincial government of Punjab. The group has attracted millions of rupees (almost 90 million rupees) from the government for their charity work – in fact, the government of Punjab, under Shehbaz Sharif, brother of former Prime Minister Nawaz Sharif, has been a generous donor to cause. by Hafiz Said. No member of the bureaucracy or of any political party has been accused of being an accomplice to terrorism. These are not new facts – all of these have been in the public domain since the 1990s, widely published in respected English magazines like Herald and various books on terrorist groups in Pakistan.

So what happened in July 2019 that the Pakistani government finally realized these facts and ordered that action be taken against Said and his group for financing terrorism? Over 40 complaints were filed against Saeed and other group leaders. Investigators found the terror group’s fundraising efforts “diverse and systematic” – selling animal skins to donation boxes in public places. In 2009, the band reportedly earned $1.2 million from skin sales alone.

In June 2018, Pakistan was first placed on the FATF gray list and given a year to complete the checklist of requirements to be whitelisted. Greylisting puts IMG funds and other donations at risk. A year later, no progress was found and the FATF increased the pressure. Then, as Pakistan typically dithered, the FATF leaned in heavily, raising the possibility of a blacklist if its demands were not met. As international lending agencies began citing Pakistan’s deliberate game of delays at FATF to withhold critical loan commitments, Imran Khan’s government had no choice but to back down from doing harm to terrorist groups like LeT. The army also fell into place as international pressure was difficult to deflect and money was scarce. Add to that its main protege, the Taliban taking control of Afghanistan, suddenly the financial needs have increased on the Afghan front. The Pakistani government, military and intelligence services had calculated that they might be able to secure funds from the Afghan side given the impending starvation of the Afghan people. It was not to be. Now, with the Russian invasion of Ukraine, there is very little hope of any recognition of the Taliban, with the burden of funding operations in Afghanistan on the Pakistani establishment.

Four years after being sanctioned, Pakistan finally seems to be moving against the LeT and its leaders. Saeed has been in prison for almost two years and charged with several cases, all related to terrorist financing. So, is Pakistan serious about pursuing the masterminds of terrorism? If so, then Said should have long since been charged with terrorism, tried and prosecuted under tough anti-terrorism laws. Then, as past experience shows, the higher courts always offer a perfect alibi for the real intention of the Pakistani establishment: to let terrorist masterminds like Hafiz Saeed stick to the state policy of jihad.

Sergio Restelli is an Italian political adviser, author and geopolitical expert. He served in the Craxi government in the 1990s as special assistant to Deputy Prime Minister and Justice Minister Martelli and worked closely with anti-Mafia magistrates Falcone and Borsellino. Over the past decades, he has been involved in peacebuilding and diplomacy efforts in the Middle East and North Africa. He has written for Geopolitica and several Italian online and print media. In 2020, his first fiction “Napoli sta bene” is published.

Love life, Family, Networth, Career, Everything you want to know about