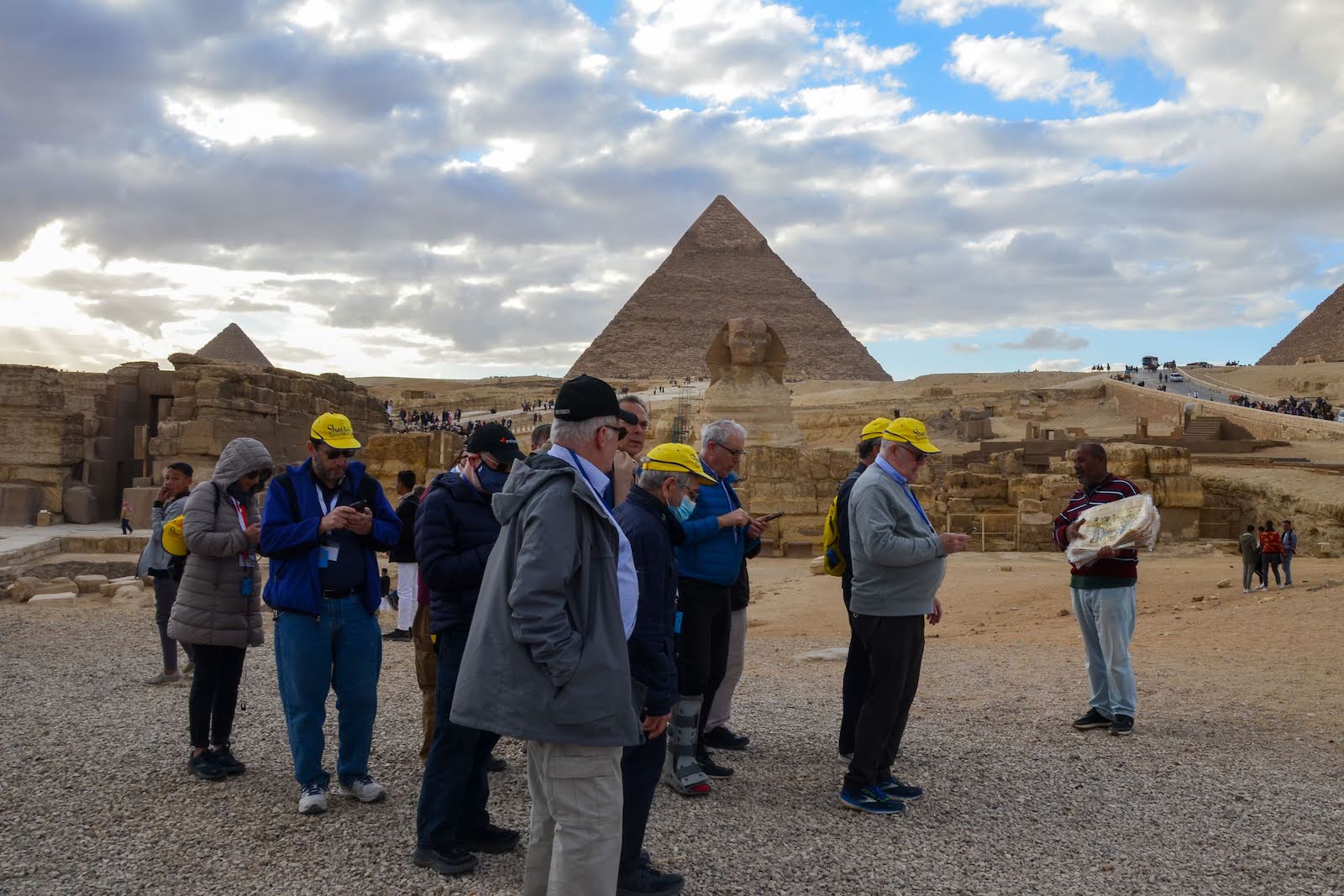 Call it “The Upside-Down Exodus”.

More and more Israeli tour groups are flocking to Cairo, Luxor and Aswan to see the sights of Egypt, and I recently led the first biblical themed kosher tour the. Exposure to Egypt, ancient and modern, is a mind-blowing experience.

It hits you as soon as you hit the highway from Cairo International Airport. In front of you are two huge panels. On the right “Nasser City”, named after the dictator who sought the destruction of Israel in 1956 and 1967, and on the left, “6and of October,” erected in commemoration of the surprise attack on Israel on Yom Kippur, 1973. stood up and announced, “Israel has been attacked; we don’t know where and we don’t know by whom.

But blink and here’s what you see now: A yarmulke-wearing Jew jogging alone in Luxor and Aswan greeted with applause and cheers as locals call out morning greetings from “Sabah al-Khair!”; 35 Jews walking through the densely populated souk in central Cairo on a Friday morning as hawkers seeking to peddle their wares approach, calling “Shalom U-vrachah!”; Jews making a minyan for evening prayers – in the lobby of the Cairo Ramses Hilton; the local hotel kitchen staff check their every move with our kashrut supervisor, mindful of following Jewish laws parallel to Muslim halal dietary laws.

In Egypt, for the first time in my life, I walked through a city where the vast majority of people were like me – devout followers of their religion. There was something liberating about not sticking out like a sore thumb in a secular liberal landscape.

Touring the sites of ancient Egypt is truly walking in the footsteps of the Exodus. Here you read in hieroglyphs names like Miriam and Pinchas” (Pinchas, an Egyptian name? Who knew?), and run your hand over mud bricks with straw that date back to the days of slavery in Egypt .

Some discoveries are truly revealing. At the Seder table, we remember how God delivered Israel out of Egypt “with a mighty hand and an outstretched arm.” Most would be surprised to learn that this biblical phrase is actually of Egyptian origin: Egyptian inscriptions regularly describe the pharaoh as “the mighty hand” and his deeds as those of the “outstretched arm.”

When the Torah describes God in the same terms used by the Egyptians to exalt their pharaohs, we see the dynamics of cultural appropriation at work. For much of its history, ancient Israel was in the shadow of Egypt. For weak and oppressed peoples, a form of cultural and spiritual resistance is to appropriate the symbols of the oppressor and put them to competing ideological ends.

Or consider this: when you write a sentence in hieroglyphics, there is a special rule: if the sentence contains the name of a god, the name of that god must be the first word of the sentence, no matter what it is. does to the syntax of the rest of the sentence. Think of a verse like Exodus 3:11: “And Moses said to the Lord‘who am I to go before Pharaoh?'” In hieroglyphs you should write this, “Lord Moses said who am I that I should go before Pharaoh? It makes reading this stuff incredibly difficult, but as a man of faith myself, the underlying idea resonated with me: put God first and work your way around Him.

One of the participants enthusiastically showed me that we have the same phenomenon in halakha. The Torah says that the High Priest must wear a diadem on which are inscribed the words “Holy to God” (kodesh the-Hashem). But according to the Talmud (Shabbat 63b), it must be written in two lines: in the top line, the tetragrammaton alone, and in the bottom line “Holy to -“. And then I understood: by sharing this “God first” mentality, I have something important in common with these ancient Egyptian idol worshipers and slaves of the Jews that I do not have with many people. who I consider good friends today.

None of this would happen now without the Abraham Accords, the tailwinds of which swept Egypt into the moderate Suni axis and its rapprochement with the Jewish state. Egyptair, which for years refused to fly its planes to Tel Aviv, now does so with a daily service. Certainly, it is not for the love of Zion but for the love of Mammon. Egyptians want Israeli business travelers to transit to Africa through Cairo. They want Jews to visit Egypt because it helps their economy. But not so long ago, such interests could not overcome animosity and radical ideology.

These opportunities challenge us to look at them with fresh eyes, as they also look at us with fresh eyes. And so, it’s a blessed time and a first step. Following the cadence of the Haggadah, we can say: this year is different from all other years. And although we can now peacefully visit Egypt, but the Egyptians do not sing Ha-Tikvah – dayenu yet.

Joshua Berman is Professor of Bible Studies at Bar-Ilan University and is the most recent author of Ani Maamin: Biblical Criticism, Historical Truth, and the Thirteen Principles of Faith (Maggid).

Love life, Family, Networth, Career, Everything you want to know about