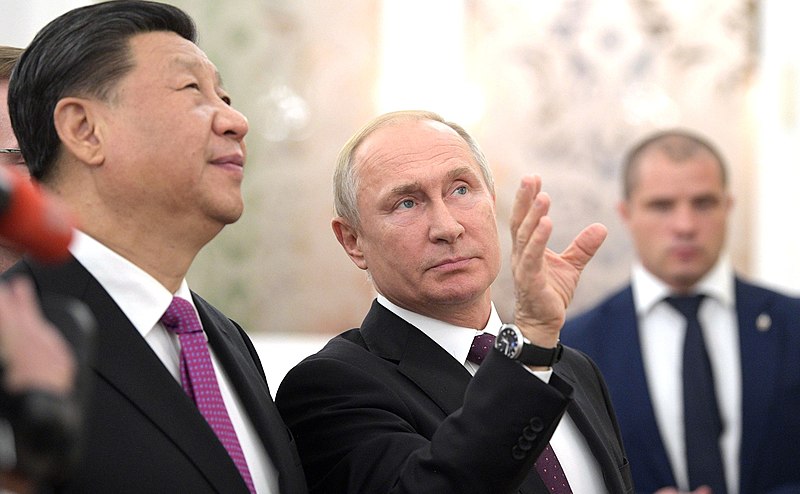 Democracy and the separation of powers are in decline.

In many countries, individuals have taken all the power into their own hands. This is particularly true for Russia and China. Vladimir Putin used his power to invade Ukraine. Recently, Xi Jinping practiced the encirclement of Taiwan.

Could Xi be as willing to take risks as Putin?

Similarities between Putin and Xi

Putin and Xi have good personal chemistry and a close strategic partnership. At the opening of the 2022 Winter Olympics in Beijing, they said their friendship was “limitless”. They are the same age; both will soon be 70 years old. Putin came to power in 1999, Xi in 2012.

President Xi’s first overseas trip was to Moscow, where he said the China-Russia partnership is the most important bilateral relationship in the world.

In order to stay in power, both men rejected rules aimed at limiting their terms. Russia is due to hold a presidential election in 2024. In 2018 Putin said he would not run. It doesn’t seem very believable. Xi will seek re-election at the 20th Congress of the Communist Party of China in November. Neither man harbored potential successors.

And both face the same enemies: the United States/NATO/the West/Japan. And both have the same deep fear: a Western-backed democratic uprising.

They considered protests in Kyiv in 2014 and in Hong Kong in 2014 and 2019 to be controlled from abroad. As a result, both Putin and Xi need systems to exert strong internal repression. In addition, they have the second and third largest military forces in the world. Russia has a large number of nuclear weapons. China has far fewer nuclear weapons, but a greater number of more modern conventional weapons.

Both Putin and Xi harbor grievances about the humiliations suffered by their countries in the past. They see it as their mission to regain lost territories. The Russian Federation and the People’s Republic of China are two continental empires. Each has a dominant ethnic group (Russians, Han Chinese) and a number of ethnic minorities. Minority groups in both countries face severe repression if they demand political autonomy.

In the years 2001-2005, China and Russia concluded border pacts. They have successfully worked together through the Shanghai Cooperation Organization, which encompasses all Central Asian countries. The internal borders of the Soviet Union formed the basis of those of its successor states after its collapse in 1991, but since then Putin has sought to redraw those borders by intervening in Georgia, annexing Crimea and invading Ukraine. .

For many years before Xi came to power, China had focused on negotiating secure borders. It was very successful. All of its land borders are agreed, except those with India and Bhutan. In contrast, China’s maritime borders are hotly contested, and the Taiwan issue has become increasingly deadlocked. Putin and Xi benefit from their countries’ border security in Central Asia, which has allowed them to focus on territorial expansion in the Black Sea and western Pacific Ocean.

Differences between Putin and Xi

Earlier in his career, Putin was an intelligence officer in the KGB, the precursor to today’s FSB. Xi rose through the ranks of the Chinese Communist Party.

Putin rules a corrupt “mafia state”. His political party, United Russia, is of limited importance, apart from securing his re-election. Xi rules a systemically constructed one-party state and has tightened the Communist Party’s grip on government, business, schools and universities.

Russia has an export economy based on oil and gas, but its other industrial sectors are underdeveloped. Exports account for more than 25% of Russia’s gross domestic product (GDP). China is also highly export-oriented (18% of GDP), but China has a diversified industrial sector that depends on global production and marketing chains.

It is possible to be an opposition politician in Russia, although you are persecuted and risk being murdered. In China, opposition is almost impossible.

Both countries have a lot of corruption, but Xi has embarked on vigorous anti-corruption efforts. Putin uses corruption as an instrument of internal power.

The oppression of political opposition in Russia is severe, but somewhat random. It is possible to be an opposition politician in Russia, although you are persecuted and risk being murdered. In China, opposition is almost impossible. The one-party state has become a digitized police state.

Putin and Xi use their military power in different ways.

Putin has engaged in active warfare in Chechnya, Georgia, Syria and Ukraine and is spending more military resources than Russia can really afford. The Chinese economy is strong enough to fund a modern military sector. As a result, the Chinese People’s Army became much more powerful than that of Russia. Despite this, China has not been at war since the 1980s. Clashes with India in 2020 in the Himalayas have consisted of hand-to-hand combat with makeshift weapons. The Chinese People’s Army lacks combat experience.

From the American perspective, China’s military strength puts Russia in second place as a strategic threat. The main threat is China, as Xi’s future prospects are much better than Putin’s.

Russia is a power in decline. China can expect to increase its power for another two decades.

Russia is a power in decline. China can expect to increase its power for another two decades. At that time, demographics will become an issue. China’s low birth rate has caused the number of working-age Chinese to stagnate; soon the number will begin to fall. This decline will make it difficult for China to muster the forces necessary to mount a military challenge to the United States and its allies.

Some see it as comfort. Others worry that Xi will become bolder as prospects for continued Chinese growth weaken. Will he think he has one last chance to conquer Taiwan?

It will depend on the aging Xi’s state of mind. Will he become more like Putin?

The willingness to take risks is associated with paranoia, impulsiveness, recklessness and narcissism. Such personality traits seem more prominent in the Russian leader than in Xi. Xi appears to be methodical, calculating and unscrupulous, but also patient. He has generated a cult following around him and his ideas, but he presents himself as a highly efficient bureaucrat.

Xi’s bureaucratic and methodical approach gives hope that China will continue to avoid war with the United States as well as with its neighbors.

In practice, this means that China will have to live with the status quo when it comes to Taiwan. Even after the military exercises around Taiwan, the missiles that have passed over Taiwan and the Chinese fighter jets that have crossed the center line of the Taiwan Strait, Taipei and Washington would do well to note the limits of Xi’s will. to take risks.

The adoption of a consistent and pragmatic policy by the West can help maintain the status quo on Taiwan and prevent war in East Asia.

South Korea-Japan Relations: Beyond the Horizon

Can you introduce me to your network? | Blogs | Foley ignite