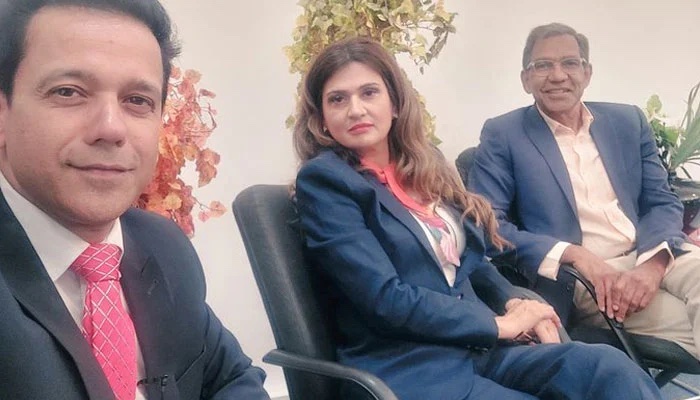 A minor political existential storm has been unleashed in Pakistan following the visit of a PTV presenter to Israel recently. The Pakistan Television Company (PTV) is the public broadcaster of Pakistan and is therefore considered the mouthpiece of the government. The move could mask Pakistan’s calculated decision to reach out to Jerusalem without angering the public, especially extremists.

PTV presenter Ahmed Quraishi was part of a delegation of Pakistani-Americans to Israel on a goodwill visit. Another Pakistani citizen on the delegation was a Jewish citizen, Fishel Benkhald. Since PTV was a government-run television station, Quraishi’s presence in Israel caused something of a small storm, with government and opposition leaders denying and condemning the action. Quraishi has since been fired. But no one in the current government, and in the previous government, is prepared to clarify how a presenter from a government-run broadcaster, even if under contract, could go to Israel without state permission. .

This question takes on importance in the presence of Fishel Benkhald who was the first Pakistani to obtain official authorization to visit Jewish holy sites from the government of Imran Khan. Now ousted, the former prime minister was heard accusing the Shehbaz Sharif government of conspiring to overthrow him with the help of the United States and its allies, including Israel.

Imran Khan seems to have conveniently forgotten that his government not only gave the first permit to any Pakistani citizen to travel to Israel, but also sent a confidant with two messages, one to the Prime Minister of Israel and the other to the General Qamar Bajwa to the head of the Mossad. , Yossi Cohen, in Tel Aviv in November 2020. The confidant was Zulfi Bukhari, a close associate of Imran Khan. According to the Pakistani television channel Geo TV, Bukhari stayed in Tel Aviv for a few days to work out the modalities for preparing the ground to break the ice between the two countries.

It is equally surprising that Shireen Mazari, a federal minister in Imran Khan’s government, chastised the current government for playing the Israeli card. She knows very well that Pakistan has been reaching out to Israel since the time of Zia-ul Haq. In fact, when she was head of the government-funded Institute for Strategic Studies, she knew that her boss, then-foreign minister Khurshid Kasuri, was meeting his Israeli counterpart Silvan Shalom in Turkey. in 2005. That same year, then-president and army chief Pervez Musharraf met with Israeli president and veteran soldier Ariel Sharon in New York.

Although the meeting did not result in a breakthrough, the relationship took a deeper direction. Israel was keen on Musharraf’s continuation and well-being. According to Wikileaks, in 2007, Mossad chief Meir Dagan met with US Undersecretary Nicholas Burns seeking support for Musharraf.

In fact, it is an open secret in political and military circles about Pakistan’s clandestine moves to open relations with Israel. Pakistan was not exactly opposed to Israel as a military dictator, Zia ul Haq said “Pakistan is like Israel, an ideological state”. That was in 1981. In 1997, then-army chief Mirza Aslam Beg clarified that “Pakistan has ‘no direct indifference’ and ‘no conflict’ with Israel. Pakistan’s only condition for formal talks was the granting of statehood to Palestine.

But this condition had not put an end to the frequent military interactions between the two countries. According to Wikileaks, Pakistan shared intelligence with the Mossad on the Gulf States and even on Israel’s security threat in India. The leaked cable quoted then-ISI chief Ahmad Shuja in 2009. The ISI has had a longer relationship with the Mossad beginning with the Afghan jihad. Offices were created, in collaboration with the Mossad, to carry out anti-Soviet operations. Wikileaks also reported that the ISI informed the Mossad in 2008 of possible attacks by Lashkar e Toiba against Israelis.

On the military front, there has been a covert but deeper involvement between the two countries. In 2013, for example, the UK Department for Business, Innovation and Skills reported that “in 2011, Israel reportedly exported military hardware to Pakistan via Britain; this equipment apparently included electronic warfare systems and aircraft parts. In 2015, an Israeli scientist attended the scientific conference sponsored by the Pakistan Academy of Sciences held in Lahore, Pakistan.

On the civilian front, in addition to political emissaries, academics have also contributed to raising awareness. In 2015, Israeli lecturer Ramzi Suleiman from the Department of Psychology at the University of Haifa traveled to Pakistan for a conference sponsored by the University of Punjab. Among Israeli academics, there is considerable interest in working with Pakistani academics, particularly in the area of ​​agricultural technology. Two Pakistani scholars had written in the Israeli newspaper Haaretz, urging Israel’s help in finding a viable solution to Pakistan’s water problems.

Equally intriguing was a delegation of Pakistani religious leaders led by former Jamiat Ulema-e-Islam leader Maulana Ajmal Qadri visiting Tel Aviv on a fact-finding mission. The delegation was sent by then Prime Minister Nawaz Sharif. Maulana Qadri made the revelations in December 2020. The same month, another prominent religious leader and JUI-F member Muhammad Khan Sherani declared his support for normalizing ties with Israel. He said, I support the recognition of Israel…Educated Muslims must understand that the Koran and history prove to us that the Land of Israel belongs only to the Jews. King David built God’s house in Jerusalem for Israelis, not Palestinians.

For Pakistan, the Israeli bone was hard to digest. Several Muslim-majority countries, including Pakistan, had stood aside from Israel on the question of Palestine. In 2020, the equation has changed with the breaking of ranks of the United Arab Emirates and Bahrain and the signing of a US-brokered agreement, the Abraham Accords, with Israel. Morocco and Sudan have joined the signatories of the Abraham Accords. These changes leave Pakistan isolated in the Islamic world, given that it has been trying, without much success, for more than four decades to find a way to engage with Jerusalem, without upsetting its image as an austere Sunni country and ardent supporter of the Palestinian cause. In fact, on every forum it can, whether there is a connection or not, Pakistan condemns Israel over Palestine, often before condemning India over Kashmir.

The latest incident is just a ruse to test the waters, once again. If that smoke leads to a real fire, who ever knows.

Sergio Restelli is an Italian political adviser, author and geopolitical expert. He served in the Craxi government in the 1990s as special assistant to Deputy Prime Minister and Justice Minister Martelli and worked closely with anti-Mafia magistrates Falcone and Borsellino. Over the past decades, he has been involved in peacebuilding and diplomacy efforts in the Middle East and North Africa. He has written for Geopolitica and several Italian online and print media. In 2020, his first fiction “Napoli sta bene” is published.